How much RAM do you need for your PC or Laptop.

“It's never fun not having the right amount of RAM for the task.” 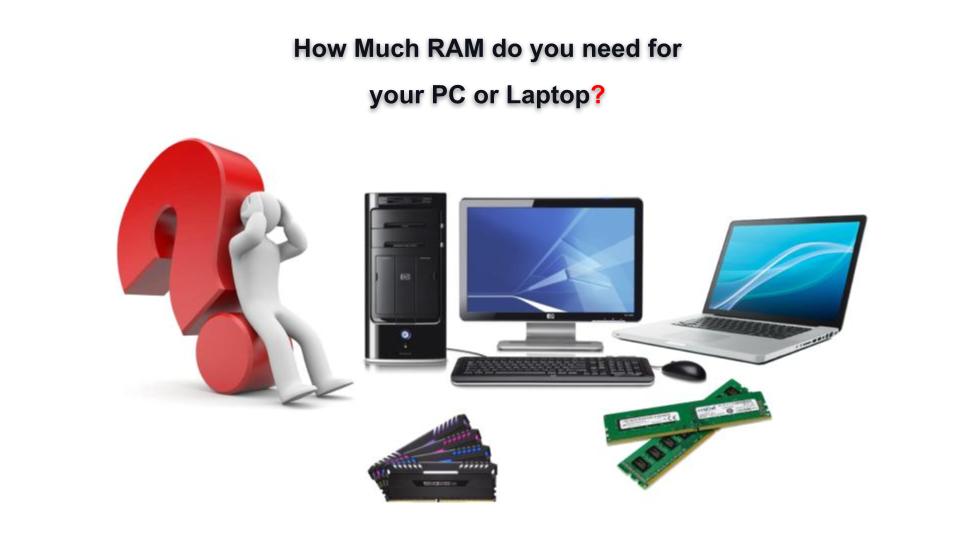 RAM, known as random access memory, is a vital hardware component used in computers. Ram stores the temporary data for quick access by software and programs and to speed up processes. The more RAM you use on your computer, the easier your laptop will be to handle complex tasks. We here as the best HP Service center Chandigarh will guide you about the amount of RAM depending on the task you are taking from your PC. Gaming computers take up a lot of RAM, and editing media can also take up a lot of RAM. We will help you know how much RAM you currently have, what type of RAM is best suited for your system, and how much RAM your computer should have for particular work.

Benefits of upgrading the RAM

Let’s be straight, adding extra RAM in your PC will not magically makes everything faster. Extra RAM help your PC to perform multitasks at one go. It can perform heavy duties to play gaming and multimedia editing. More RAM doesn’t make the computer faster, but it will make your computer more reliable performing multitasking and multi-dimensional duties.

Adding RAM may help if you have a PC with a powerful graphics card (GPU) and fast processor (CPU), but 17 tabs won’t load simultaneously without grinding things to a halt.

How much RAM is required?

How much RAM is required in a PC depends on what you use your PC for daily and how long you intend to keep the computer. If you’re thinking of investing in a new machine, this point in time is the best way to get the best out of the best. But if you are already having a computer and you want to upgrade its configurations then adding extra RAM is really a productive step.

If you are using your PC loaded with Windows 10 for word processing, regular checking of emails, browsing the internet in a normal manner, and playing games like Solitaire, you should have no problem using 4GB of RAM. Many budget PCs come with 4GB of RAM as a base option, but if you wanted to multitask and decided to keep the PC for more years then opting for 8GB of RAM is the safer way to get good performance.

Hey, It’s not about Solitaire, it’s about serious Gaming. Heavy PC games like PUBG, Free Fire, Minecraft, and other games for acceptable performance levels require substantial RAM. These games need at least 8GB to run correctly. But if you’re really a serious gamer and want better performance, we suggest going with at least 16GB of RAM. Again, if your pocket is allowing you to go far from 16Gb and 32GB is the super-performing option for you.

Virtual reality (VR) is a relatively new medium, and running it smoothly requires a significant amount of RAM. For HTC Vive, Oculus Rift, and Windows Mixed Reality (WMR), a minimum of 8GB of RAM is required on the PC.

In reality, you should go with at least 8GB; most games require a substantial amount of RAM to run smoothly, but the Vive only recommends 4GB.

Go for at least 8GB of RAM, but consider opting for 16GB or even 32GB, according to the game’s requirements, if you want to join the thousands who stream videos of themselves playing games. Your PC has to deal with running the game and streaming video to the internet simultaneously.

See a beginner’s guide to Mixer streaming if you need help setting up your stream.

The size of memory you need depends on your workload. If you edit a lot of HD video, you may want to go for 16GB or more. With a bit of video and photos were thrown in, 8GB should be enough.

Although editing apps will work on lower amounts of RAM, you’ll soon become frustrated with the poor performance and begin to yearn for an upgrade.

Besides RAM size, you should also think about the RAM speed of your PC. If you want to move more data back and forth, you should choose RAM with a higher frequency. However, latency refers to how fast your RAM responds to CPU requests.

CAS latency has increased as RAM frequency increases, but the fact remains that actual latency remained the same because of a decrease in clock cycle time. As a result, you can get high-speed DDR4 RAM with about the same latency as older DDR3 RAM; only half the speed.

If you’re doing any high-performance task on your PC, opting for a higher frequency — measured in megahertz (MHz) — is the best action plan.

RAM configurations differ mainly depending on your motherboard. The number of DIMM slots on a motherboard varies; some have four, some have two, and some rugged task PCs have more than two. Here we will teach you how to see the amount of RAM your PC currently has and what type of RAM is installed in the PC and how many RAM slots you are working with. This method will quickly tell you how much RAM your PC currently has installed:

Now we will tell you a method of using Crucial System Scanner to check the RAM configuration and compatible RAM.

After completing the scan process, you will see a memory section on the left side of the window with the number of slots for RAM and the maximum amount of RAM your PC’s motherboard can handle. In this case, the motherboard has two places and can handle up to 32GB of RAM.

A list of compatible RAM available from Crucial will appear on the right side of the window. Using this, you will also know what kind of RAM is used

There are two common types of RAM available: DDR3 and DDR4. As DDR4 is a newer version of RAM, it will not fit in the older motherboards made for DDR3. To fit into the motherboard, DDR4 need a different pin configuration. There is another type of RAM available in the market, and that is SODIMM ram. This is a “small outline dual inline memory module”, which won’t fit in standard RAM slots. If somebody uses a small laptop all in one PC, there are many chances that these machines have the SODIRAM. So whenever you buy an all-in-one PC or a small notebook, you must take care of this fact.

Best RAM for your PC

First of all, it’s you who will decide what kind of work you will do with your puck, how heavy that work is, and how long that work has to be done continuously. How many rich applications you will use will decide the amount of your RAM? After you choose this, you will have to pay attention to the RAM while buying a PC or laptop.

Let us help you with a more complicated matter as well. This is for those who want the performance of their PC to be very good, fast, and accurate, but they do not know how much and what kind of ram will be used for which work. We make it easy. If you want a simple PC in which you can play decent games, and video streaming also run well and is not too slow while performing other tasks, then 8 GB SSD RAM in your puck will be fine.

If you are fond of playing heavy games and use rich software programs too often, then you will have to increase the amount of RAM. Our advice is that in such a situation, you should use 16GB of SSD RAM instead of your 8.

This advice is for users who do not use professional programs, games, or software. If we talk about professionals, then the only suggestion is to close your eyes and, without thinking much, use 32GB of SSD RAM directly while upgrading your PC. You will not face any problem

No comments to show.